HATS has been analyzing air samples collected in flasks since 1977. Originally set up under the auspices of the Geophysical Monitoring for Climatic Change (GMCC) division of NOAA's Air Resources Laboratory (NOAA/ARL), this program initially involved the analysis of flask samples from only five remote sites in both hemispheres: Point Barrow,

Originally, air was collected weekly in pairs in 300-ml electropolished, stainless-steel flasks (from Whitey with Nupro SS-4H metal bellows valves) filled to 1.5 atm with a metal bellows pump to minimize contamination of CFC's by plastics or other elastomers. All samples were analyzed for N2O, CFC-11, and CFC-12 in the Boulder labs on a Hewlett Packard 5710A, electron-capture gas chromatograph (GC/ECD) equipped with a Porasil A column. 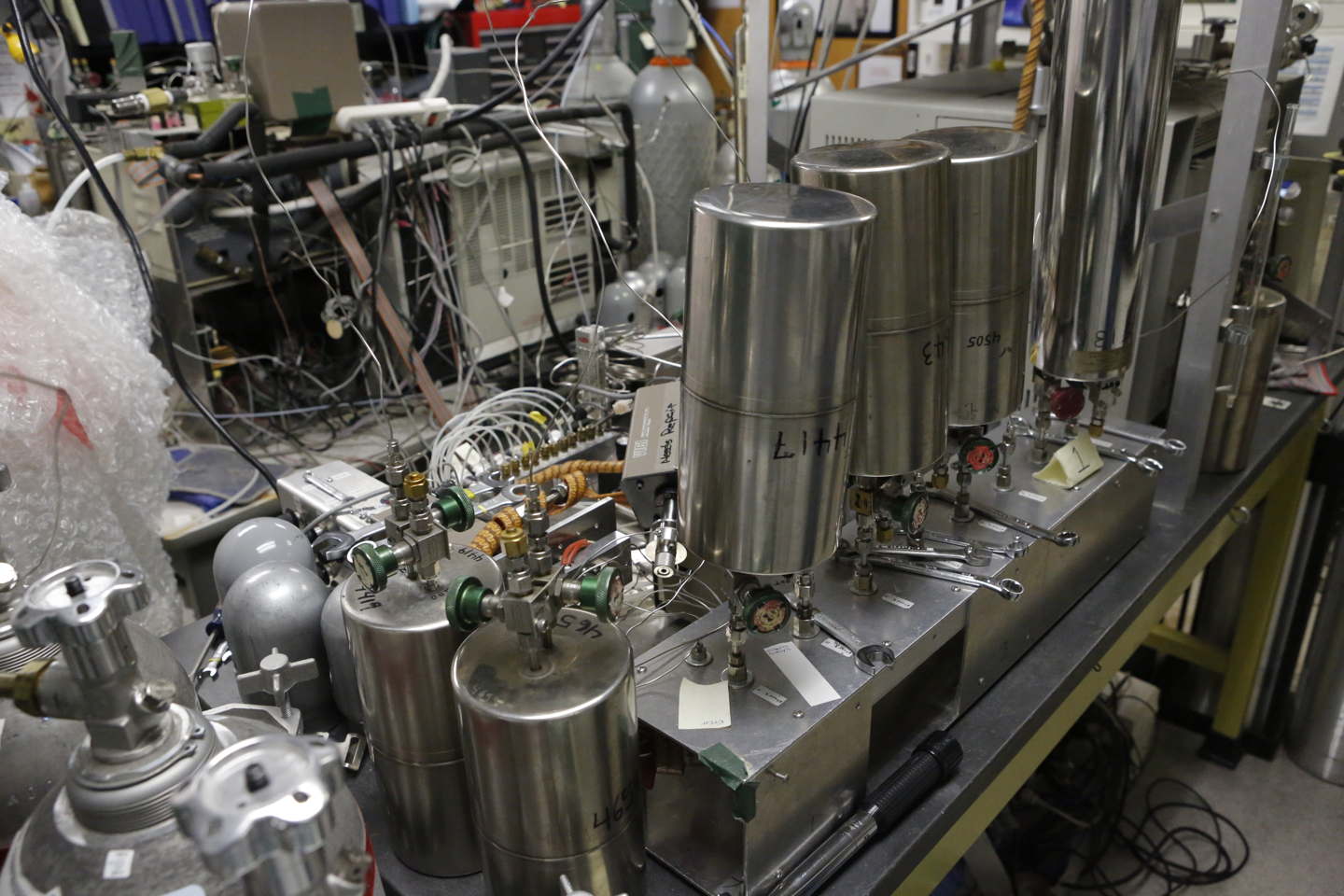 In 1986, slightly larger stainless-steel flasks (850 ml, Biospherics) were circulated to sites and pressurized with ambient air to ~4 atmospheres of absolute pressure with KNF Neuberger diaphragm pumps (Model UN05SV1). This allowed for the analysis of larger quantities of air for improved measurements of trace gases present at low concentrations or trace gases that only responded weakly on the ECD. Measurements of Halons by GC/ECD were begun in 1988 (on the LEAPS instrument) and the analysis of flask samples for CFC's, N2O, CH3CCl3, and CCl4 by GC/ECD was fully automated by 1992 on a newer generation GC/ECD instrument (called Otto).

In late 1991, HATS began analyzing flask samples for hydrochlorofluorocarbons (HCFC's), hydrofluorocarbons (HFC's), and other halogenated trace gases by gas chromatography with detection by mass spectrometry (GC/MS, the M1 instrument.  Chromatographic analysis is performed on a 60m DB-5 column with cryotrapping of the air samples). To allow for this additional analysis, larger electropolished stainless-steel flasks (2.4-L flasks Max Planck Institut für Chemie, Mainz, and 3-L flasks from Lab Commerce, USA) were circulated to the sample sites.  These flasks were found to store a number of trace gases more reliably than the smaller 850 ml flasks and enabled, along with the development of the GC/MS instrument, reliable measurements of a number of additional gases by the mid-1990s.

In 1997, the M1 GCMS was fully automated to allow the analysis of flasks and standards through the night.   This involved remaking the sample handling box with new devices for automatically controlling flow from a manifold of different flasks and standards. Peak integration was also automated through a custom program running in Excel.  These changes increased the efficiency and precision of the measurements and enabled many more flasks to be analyzed in the program.

By early 2000s, glass flasks were also circulated to some HATS sampling sites.  These glass flasks are identical to those used by the NOAA carbon cycle group (they have glass pistons and Teflon o-ring seals).  Glass flasks are circulated to a subset of sites for three main reasons.  First, they allow reliable measurements of a number of gases that degrade when stored in stainless steel flasks, particularly at dry locations and when the delay between sampling and analysis is long.  For example, reliable flask measurements of methyl bromide, bromoform, methyl iodide, carbonyl sulfide, and other gases are only possible at the South Pole from glass flasks. Secondly, glass flasks allow us to determine if results for many gases are independent of flask type (e.g., at CGO and SPO).  At some sites, however, only glass flasks are used (PSA, SUM, WIS, and, initially, WLG).  Finally, glass flasks allow sampling at new sites for much lower start-up costs than if stainless steel flasks were used.  This has been an important factor in us being able to increase the number of sampling sites in our network has in recent years.  The main downside of using glass flasks is that they prevent reliable measurements of specific compounds owing to contamination, probably related to the Teflon o-rings and the chemicals they came in contact with during manufacture.  In the 1980s this contamination was observed for CFC-113; since then we have observed enhanced levels of HCFC-141b, and C2Cl4 in glass flasks.

In mid-2006 measurements from LEAPS were stopped.  Continuity of measurements was provided for three halons by the GCMS (M1) analysis of flasks.  While two of the halons could be measured readily by the GCMS in its existing configuration, it was possible for H-1301 during 2006 and 2007 only by reanalyzing flasks with a short plug of ascarite in the sample stream (not the typical configuration).  Ascarite removed CO2 from the sample air stream and allowed quantitative analysis of more volatile gases free from the multiple matrix effects (in the transfer of condensed sample to the column, and in the mass spectrometer. 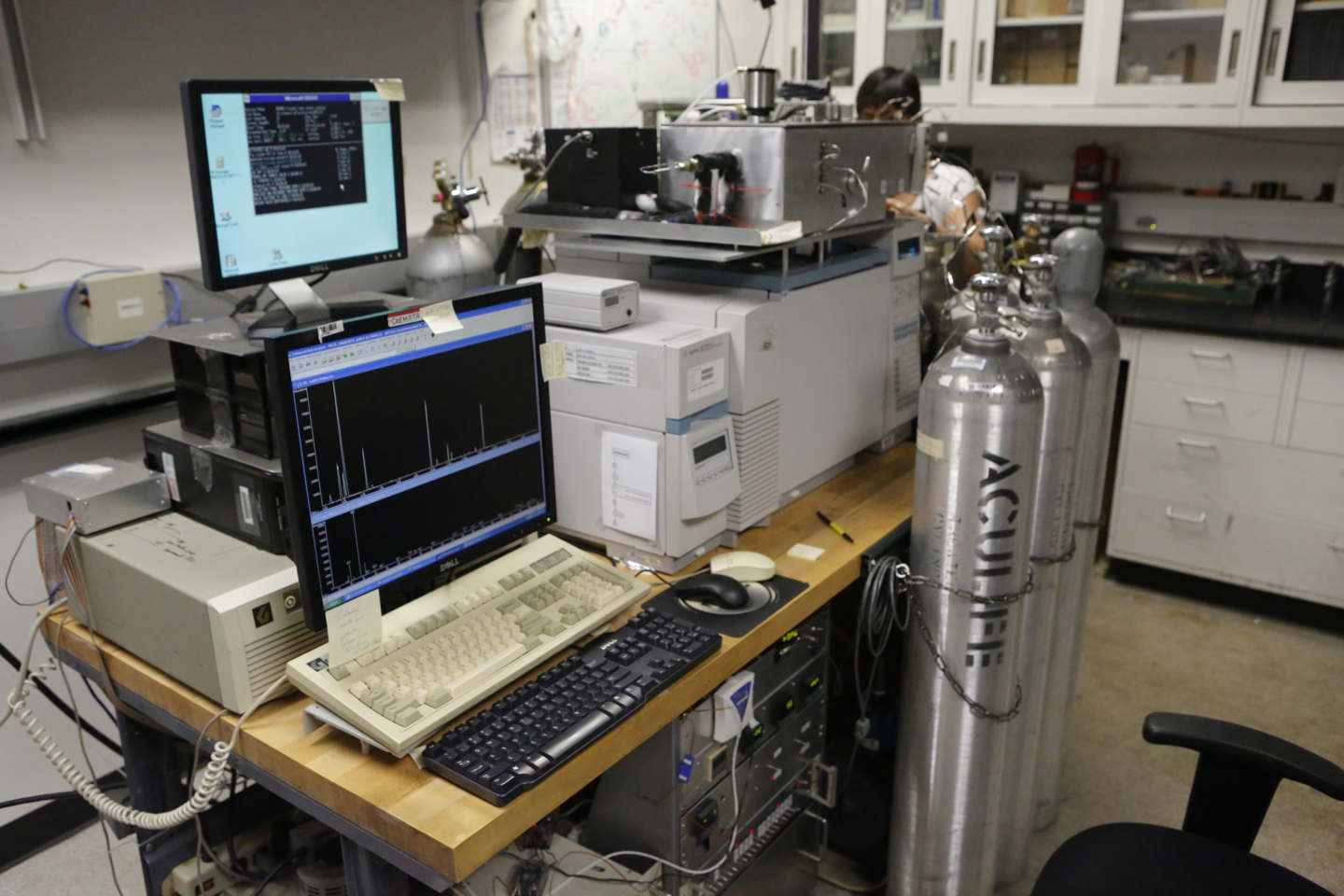 In 2007, a new GCMS instrument (M2) was constructed in collaboration with the Carbon Cycle group to enable higher throughput of samples, mostly from the Carbon Cycle’s North American tall tower and aircraft programs.  The more retentive column installed in this instrument (GasPro) enabled reliable and regular measurements of more volatile gases such as CFC-115, HFC-125, HFC-143a, HFC-32, H-1301, and a number of hydrocarbons from the Carbon Cycle’s North American network flasks and also from a subset of the HATS global sampling network flasks.

In 2009, after 18 years of operation, it was apparent that the original mass spectrometer (M1) was not operating well; precision for many gases had degraded and matrix effects were apparent for the analysis of CCl4, for example.  In June of that year the GC and MS were replaced with newer models (Agilent 6980 GC and Agilent 5973 MS) (instrument M3).  The devices and plumbing associated with sampling handling, and the means for controlling those devices did not change.  Results from the new mass spectrometer were substantially improved for nearly all the gases measured in the program.

Throughout the years, the HATS flask program has also been able to participate in a number of short-term projects that focus on issues of relevance to understanding trace gas abundances and trends in the remote atmosphere, particularly for gases that influence stratospheric ozone, climate, and air quality. This participation has involved flask sampling air pulled from the firn (unconsolidated snow) above glacier ice (e.g., at Tunu and Summit Greenland, and at South Pole, WAIS Divide, Siple Dome, and Megadunes in Antarctica), from ships traversing the Pacific or Atlantic or Pacific Ocean (e.g., BLAST I and II), from trains (TROICA 7 & 8), from automobiles (FRES), and from aircraft (e.g., ARCPAC, BARCA, HIPPO 1-4).

Since 2007, the HATS flask program has collaborated with the Carbon Cycle Group’s ongoing Tall Tower program (13 active sites) and Aircraft Profiling project (19 active profiling locations) to provide long-term measurements of trace gases at high frequency and throughout the troposphere at sites concentrated over North America.

Chemicals for which results are regularly posted on the web (for data click on links below or use IADV):

Chemicals that are also regularly measured from HATS flasks but for which results are preliminary and not posted publically at this time:

(note, this list does not include gases measured on the new Perseus instrument.)

Calibration gases are prepared through HATS's Standards Program and measurements are coordinated with HATS's In Situ Station Program.

Projects within our flask program: